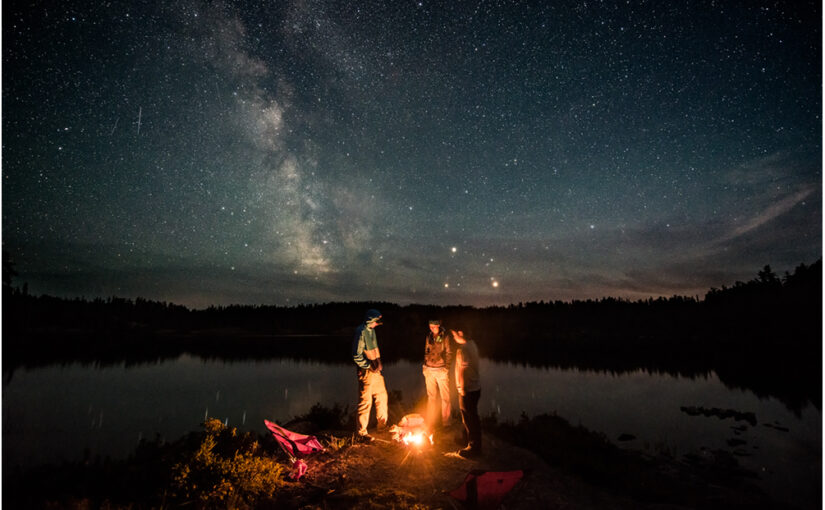 In the first three posts in this series (Part 1 – Origins, Part 2 – The Formation of Stars, and Part 3 – Planets and the Conditions Necessary for Life), we discussed our origins from the Big Bang to the formation of our solar system and the basic ingredients that allowed life to develop and flourish on our planet.

In this final installment, we discuss what may happen next. As in the first three articles, we will use imagery taken from our observatories in Killarney Provincial Park.

Stars are in an epic battle between two forces: the crush of gravity and the outward explosion of radiation from nuclear fusion within their cores. This massive tug of war is played out over the life of the star. However, as the stars start to drain their primary fuel source, hydrogen, they must switch to other sources to generate thermonuclear heat. In the end, stars will die in different ways depending on how massive they were when they first formed.

As we learned in our second installment, stars are created from hot balls of gas that have condensed from nebulae.

However, not all of these condensations are of the same mass. Some condensations formed stars that are much more massive than others. Today, astronomers have seen stars as small as 0.1 times the mass of our Sun (OGLE-TR-122b) to several hundred times more massive (R136a1), with almost 90% of all stars of equal or lower mass than our own Sun. Of the remaining 10%, few exceed 20 solar masses.

Mass and a star’s fate

Most stars go through their lives on what we call the “main sequence.” This is a way to classify a star based on its normal conversion of hydrogen into helium.

More massive stars require more heat to push back against their tremendous gravities. They live hard and die fast, using up their available fuel within only a few tens of millions of years. However, their surface temperatures are very hot as their cores are producing so much heat.

Stars smaller than our Sun can live for billions or even trillions of years. These stars have relatively little mass crushing them, and don’t require as much energy production to push back, keeping their surface temperatures cooler.

Thus far, we have described the basics of stars converting hydrogen into helium and living out their lives according to how massive they are. But what happens towards the end of their lives depends on their initial mass.

The final chapter in a star’s life

The end of a Sun-like star’s life is fascinating and complex, far beyond the scope of this discussion.

As a star like our Sun runs out of hydrogen in its core, it starts to contract and heat up inside. Its outer layer of gas puffs up and cools down, and it becomes redder in the process. Astronomers call this a Red Giant Star.

The above image of the beautiful double star Albireo shows two differently coloured stars. Their colours are directly related to their mass and life stage.

The blue star on the left is a hot, main sequence star that is more than twice the mass of our Sun. Its surface temperature is very hot, creating the blue colour. In contrast, the amber star on the right is an example of a star that has left the main sequence and is now a red giant star. Its outer atmosphere has puffed up and cooled, hence the red colour. [1]

The vast majority of Sun-like stars will outgas a great deal of material in their last few million years of normal life.

This material is energized by the radiation of a hot central star (more on this star in a moment) and re-emits light that we can easily see.

M57, the Ring Nebula (above) is an example of a Planetary Nebula. This type of emission nebula appears ring-like, but is actually spherical in shape. “Planetary” nebulae were so named because in the low-power telescopes of those who first observed them hundreds of years ago, they resembled the shape and relative size of planets.

The end of a gigantic star’s life

Antares is a reddish star visible in the southern sky within the constellation of Scorpius the Scorpion. In addition to its beauty, it is one of the biggest and most massive stars easily visible in the night sky.

Antares is almost 700 times bigger and over 10 times more massive than the Sun. If you were to put Antares where the Sun is, the planets Mercury, Venus, Earth and Mars would all be inside the star! It is one of only a few stars where we can actually see structure upon its surface (see the first image in the video below).

Stars the size of Antares, known as “supergiant stars”, can grow so big because their tremendous mass exerts a great deal of gravitational pressure on their cores. There is so much pressure that each star can go through many cycles of:

The creation of iron: the beginning of the end

Near the end of a massive star’s life, it will resemble an onion. Various types of nuclear reactions happen at different levels within the star, with the end products of one nuclear reaction becoming the raw ingredients for the next.

This process goes on and on until the star has produced iron. Iron fusion requires energy rather than producing it. Once a star produces iron, it has reached the very end of its nuclear fusion capability.

When the iron core no longer pushes back against the tremendous gravity, the star begins to implode. Without going into more detailed physics, all the matter comes cascading down and crushes the atoms in the core. The protons and the electrons are pushed together into neutrons. The neutrons act like an impenetrable wall upon which the outer layers of the star crash against.

The crash causes the material to bounce back outwards, colliding with more material that is still falling inwards. The energy of this collision creates a tremendous explosion that we call a supernova.

Supernova: the awesome end to a massive star

The animation below starts with an image of the star Antares taken by a team at the European Southern Observatory led by K. Ohnaka. Time has been sped up to show the process of the star collapsing in on itself.

In this imaginary Antares supernova, the colourful shell of material ejected out from the former Antares represents the various layers of fusion products that we have already discussed. The final image is of the supernova remnant that we call the Veil Nebula. Does that image look familiar? It is the same Veil Nebula supernova remnant that we described in our first post in this series.

With this final image, we have come full circle in our journey. Supernovae leave their leftover materials in the interstellar medium. Those materials collide with existing gas clouds, thus enriching them and starting the star formation process anew.

Supernovae are amazing events that can outshine an entire galaxy for weeks. They release more energy over their 40-day lifespan than the Sun will in in its entire life of 10 billion years.

Two stars visible in the Northern hemisphere, Antares and Betelgeuse, are good candidates to become supernovae.

Below is an image taken before and during a relatively nearby supernova that occurred in 1987. It was first observed by Canadian astronomer Ian Shelton at the University of Toronto’s Las Campanas Observatory.

Coming back down to Earth

Think of the last time you gathered around a campfire with friends and family.

You basked in the fire’s warmth, bathed in its light, and were mesmerized by its flickering glow. After a wonderful day hiking, canoeing, and swimming in “your” park, you were grounded by earthly beauty, and yet a mystery still lay overhead.

Dante Alighieri wrote in his 14th century work, Divine Comedy, “The heavens are calling you, and wheel about you, displaying to you their eternal beauties, and still your eye is looking on the ground.” With this four-part series, we hope we have given you the opportunity to lift your eyes towards the skies above you while providing a greater appreciation for life and the ground below.

The next time you are sitting around a campfire in one of our many provincial parks, take a moment to gaze skywards and think about the connection between the fire in front of you and the “fires” in the sky.

This concludes our series on the astronomical origins of the universe. If you didn’t have a chance to read them, we encourage you to go back and start at the beginning of this series.

[1] Other than a few images captured with special techniques or the Hubble Space Telescope, we cannot see nor photograph stars other than as pinpoints of light. In this image of Alberio, the star’s size is merely a photographic artifact and should not be taken as showing its actual physical size.