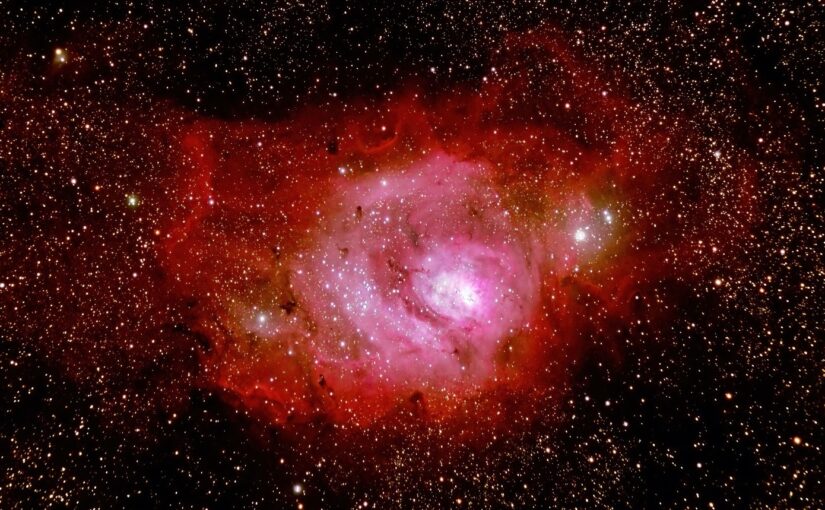 In our previous post, we discussed the Big Bang and the formation of galaxies, globular clusters, and supernovae remnants using images taken from the observatories in Killarney Provincial Park.

In today’s post, we will explore how stars are born and start their lives.

Nebulae and the formation of stars

Our galaxy, the Milky Way, is one of trillions that contain stars, gas, dust, and dark matter. In and amongst the stars within a galaxy, we find the nebula.

Nebula, coming from the word nebulous (meaning foggy or unclear), is a term astronomers use to describe three types of objects:

If an interstellar cloud of gas and dust is charged up by nearby starlight and fluoresces like a neon sign, astronomers will refer to it as an emission nebula.

There are countless emission nebulae visible in the night sky with the proper equipment, often showing as reddish in colour in photographs due to the wavelength of the light produced by the charged-up atoms and electrons.

If there is a lot of dust, but insufficient starlight to charge up the cloud of gas and dust, we will often see light reflected from this dust in the form of blueish light.

We call these types of nebulae reflection nebulae.

As astronomers peer out into the distant reaches and observe the many splendours, they often observe what at first appears to be dark regions within the distant areas.

But astronomers have studied these dark areas and determined they are not an absence of material in the background view, but rather clouds of interstellar dust that are so thick that they obscure the light of the more distant objects.

We know this because we can switch our view from visible light to infra-red light, which is not as affected by the dust, and see background objects with less obscuration.

The phoenix-like lives of stars

Just to name a few.

Most of the nebulae we view today contains a plethora of atomic elements, the debris of the previous stars mixed like seasoning to a soup broth, among the ever-present hydrogen gas.

Some of these atomic elements combine into molecular clouds, producing a complex and a rich set of chemistry available for the next generation of stars to use in their formation.

This “soup” of material is what gives rise to the emission, reflection, and dark nebulae we observe. It is believed that our Sun formed in exactly this manner when a nearby supernova explosion affected the nebulae from which our own Sun and solar system were born.

The image below is of the Trifid Nebula, named for the three larger lobes visible to those who first discovered it hundreds of years ago.

The compression of installer clouds of gas and dust, like the Trifid Nebula, by a supernova shockwave (more on the Veil Nebula), or the random collision with other interstellar clouds, creates eddies of gas that start condensing in amongst themselves.

As these condensing balls of gas increase in mass, their gravitational attraction increases and they begin to pull in more material. This positive feedback loop continues until the ball of gas becomes massive — a protostar.

The great mass of a protostar is constantly trying to crush its core which, in turn, causes tremendous densities and heat within the core.

This heat build-up eventually passes 10 million degrees, hot enough for the nuclear fusion of hydrogen to helium and… a star is born.

The outward radiation generated from nuclear fusion is so great that, at least for most of the star’s life, it is able to push back against the crushing force of gravity.

In the above image of the Lagoon Nebula, note the large numbers of bright stars just left of center. These are newly-forming stars being born within their stellar nursery of gas and dust.

The Sibling Stars journey out on their own

Newly-formed stars produce tremendous radiation pressure that pushes at the nebular cocoon of gas that surrounds them.

This constant pressure is so intense that in time it may completely push away the gas of the nebula, leaving little trace of their beautiful birth homes.

What remains is an open (loose) cluster of stars.

The Wild Duck Open Cluster (shown above) is one of the richest open clusters in the sky, composed of a thousand stars.

Most clusters contain between a few tens to a few hundred stars. The Sun was formed in this manner but has long since departed from its stellar siblings, allowing it to embark on the next stage of its journey: the utilization of the leftover gas and dust to form our solar system.