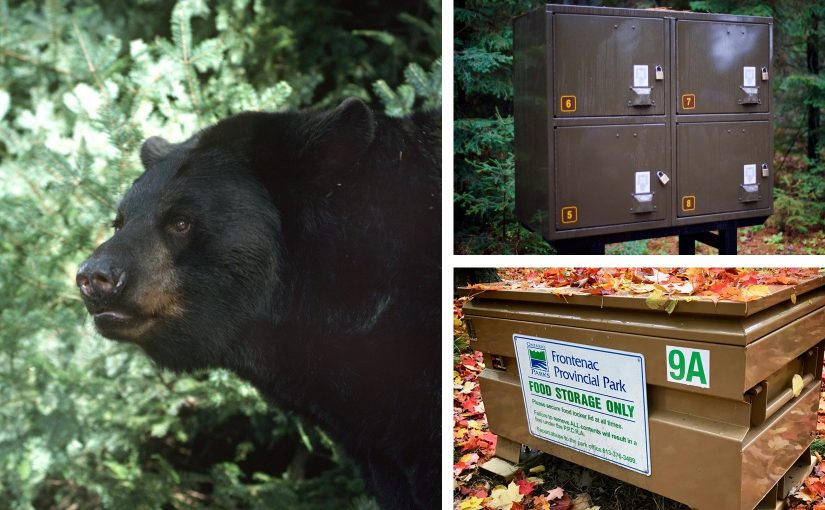 Good news, campers! Our parks are implementing new ways to deter bears and other wild critters from making off with your dinner.

Read about which parks offer bear-resistant storage containers and how you can use them during your trips.

Frontenac just installed food lockers at each of the 48 campsites, and campers have already mentioned how much they love them!

Each locker is identified with the corresponding campsite number (please don’t use another camper’s food locker), which should be kept clean for subsequent users. You should always remove all food and debris when vacating your site.

In 2010, Sleeping Giant installed storage lockers at three of their signature backcountry campsites (two at Tee Harbour, one at Lehtinen’s Bay and one at Sawyer Bay) to keep campers’ food dry and safe.

These multi-compartmentalized, stainless steel lockers are mounted on an 800-pound concrete footing to ensure no animal will be stealing your tasty snacks. They were designed to not be overly conspicuous so that their presence does not take away from the experience of spending a night in the pristine backcountry. The storage lockers at Grundy Lake were intended for visitors who didn’t have a trunk, such as Park Bus travellers, motorcyclists or backcountry campers.

Grundy has a locker stationed at each of the park’s nine canoe-in sites.

Although bears can still smell any food in these bins, they cannot access it and therefore will not be rewarded with human food. As a result, they are less likely to keep returning to the campsite. These lockers are first come, first served, and are especially handy for Park Bus travellers and motorcycle adventurists.

All campsites in The Massasauga’s Blackstone Harbour and Captain Allen Strait have bear bins and more will be added soon! The total number will be a little over 60 bins out on the 100 campsites serviced by Pete’s Place.

Missinaibi was one of the first parks in the Northeast Zone to offer storage lockers. They are permanently installed on a number of campsites and some in central locations.

Lake Superior will be implementing food storage lockers as well. There are two installed currently, one at Agawa Bay and one at Rabbit Blanket Lake. Stay tuned for more information about more storage lockers along the Coastal Trail this season.

The bins stop the bears from making off with your meals, but you still need to keep a clean campsite. A bear’s excellent sense of smell will still lead it to an untidy campsite, no matter how secure your food is.