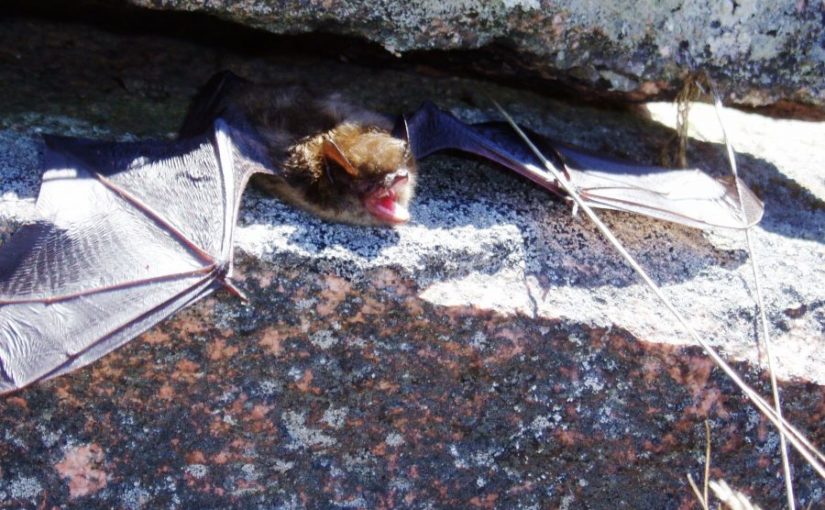 Bats are the only mammal capable of true sustained flight, and with over 1,300 species and counting, they make up the second largest order of mammals.

This is the order Chiroptera, meaning “hand wing” in Greek, and suitably their wings consist of elongated hand bones joined by a membrane of skin.

Most of us are familiar with the phrase “blind as a bat.” Bats are, in fact, not blind and have vision comparable to humans, but most species are nocturnal and use echolocation, a form of biological sonar, to supplement their nighttime vision.

Species of bats are found everywhere in the world except in the most remote Arctic and Antarctic regions, and therefore much variation is seen among different species.

Most bats eat fruit or insects, but some species have also been observed eating rodents, fish, frogs, birds, smaller bats, and the blood of livestock and birds. Size: 9-13 g, average forearm size of 41 mm
Roosts: cavities such as hollow trees
Diet: wide variety of insects, often over water
Winter behaviour: migrates, but migration routes are unknown
Fun fact: sometimes roosts on the outside of buildings during the fall migration

Size: 4-7 g, average forearm size of 36 mm
Roosts: in small crevices, under bark, or in human-made structures
Diet: wide variety of insects, including flightless insects and spiders
Winter behaviour: hibernates in caves or abandoned mines
Fun fact: the only bat in Ontario that has been observed gleaning (catching non-flying prey off of tree leaves, grasses, or the ground)

Since bats are found almost everywhere in the world, they play an important role in many different types of ecosystems and provide many ecosystem services to humans.

The majority of bat species are insectivorous, consuming up to their body weight in insects every night.

Many of these insects are damaging agricultural pests that wreak havoc on crops such as corn and rice. Research has shown that bats are worth billions of dollars a year in reduced crop damage and unneeded pesticide use, which means bats are helping our economy in addition to reducing the number of pesticides entering our ecosystems.

And more good news — bats also eat mosquitoes! One bat can consume up to 1,000 mosquitoes in one hour.

Many fruit- and nectar-feeding bats pollinate ecologically and economically important plants around the world.

In fact, over 500 species of flowers rely on bats as their major or exclusive pollinators, including bananas, peaches, cacti, and blue agave, the plant from which tequila is made! As forests continue to disappear around the world, bats play a critical role in restoring natural areas by dispersing seeds of plants into clearings.

Unlike birds, who avoid flying over clearings for fear of exposure to predators, bats must cover large ranges at night to find food. This allows them to access areas unreached by other seed dispersers. In fact, seeds dropped by bats can account for up to 95% of first new growth!

Bats disperse seeds for many economically important plants as well, including cashews, figs, avocado, and papaya.

Bats reproduce very slowly — females usually only give birth to one pup per year and as a result, it is extremely difficult for them to recover from substantial population declines.

Forests everywhere are disappearing at an alarming rate, usually as a result of timber harvesting, urbanization, or clearing for agriculture. Many bat species use forests to roost or forage for food. As these woodlands disappear, so too do the roosting sites and food supplies of these species. Other species roost in caves and are driven out by cavers, miners, or even tourists looking to snap a photo.

It is vital that bats are not disturbed when roosting; be sure to stay out of caves and plan maintenance work for buildings during times when bats are absent from buildings in the fall, winter, and spring whenever possible.

White-nose Syndrome (WNS), caused by a fungus called Pseudogymnoascus destructans, was first discovered in North America in late 2006. In infected hibernacula (caves where bats hibernate), the mortality rate can be as high as 80%-100%.

In total it’s estimated that WNS has killed approximately 10 million bats since 2006. The fungus was found in Ontario caves in 2009, and continues to spread west. The four species of bats that are endangered in Ontario all hibernate in caves and have been affected by the disease. Learn more about White-nose Syndrome.

Pesticides have been shown to have negative effects on many insectivorous animals, and bats are no exception. Pesticides are sprayed on plants or insects, then consumed by bats, storing them in their fat stores until winter.

During hibernation or migration, bats must utilize their saved fat stores. By this time, however, large amounts of pesticide can have accumulated in their stores, leading to pesticide poisoning. In winter, this can mean excessive burning of fat stores and immunosuppression, making poisoned bats more susceptible to infection caused by the fungus responsible for White-nose Syndrome.

Even if a bat is able to survive winter poisoning symptoms, they are often plagued with reproductive problems such as stillbirths in the spring.

Learn more about threats to bats:

You can help bats!