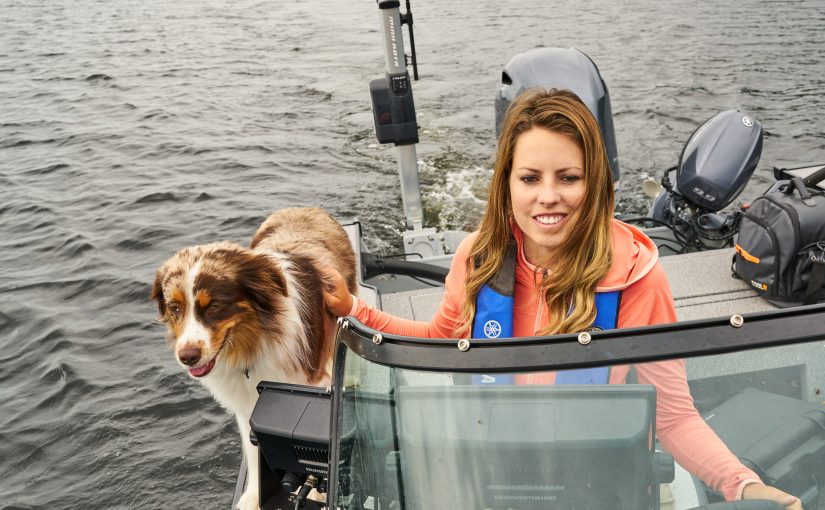 A few years back I helped run a bass fishing tournament on Sharbot Lake. As an event organizer, I didn’t get a chance to fish there, but I saw some nice-sized bass being weighed-in (and released, of course).

This summer I finally set out to spend some time exploring and fishing at Sharbot Lake Provincial Park to see if I could find some monster bass of my own! The park is located on Highway 7 less than an hour and a half west of Ottawa, and just over an hour north of Kingston. The park nearly surrounds Black Lake and also fronts on a northwest section of Sharbot Lake.

It isn’t a far drive from my home in Ottawa, but it’s still far enough into the country that it’s peaceful, providing a nice escape from the hustle and bustle of the city.

With my larger deep-v-style boat, I set out on the larger of the two lakes: Sharbot. Black Lake is smaller and more sheltered, ideal for smaller watercraft and canoes/kayaks. I had bass on the mind and brought along my puppy Blitz and fishing partner Eric.

This was our first time on Sharbot Lake, so we began by checking out a map and focusing on areas that have both shallow and deeper water nearby.

As the season goes on, bass will be more spread out, but they’re usually found not too far from where they spawn (typically in the shallows) early to mid summer. When I stepped out of the truck to check out the boat launch, I was pleased at how clear the water was. The park has a nice boat launch on Sharbot Lake that is a mix of gravel and concrete, along with docks. Spending long days on the water, I always keep a note of where the nearest washrooms are located and found an outhouse just a quick walk up from the launch.

With a drop in temperature overnight and passing through a storm on the way to Sharbot Lake Provincial Park, I wasn’t sure how active the fish would be. Sometimes a cold front can mean it’s best to slow down presentations as the fish are not quite as active.

The good news is that although the conditions had drastically changed from the day before, we still caught loads of fish and they were quite active. We just had to find a pattern that was working and duplicate it.

Working together, Eric and I covered the inside and along the edges of weedlines. We threw weedless flipping jigs (to fish right in the thick of the weeds), and then Chatterbaits and Ned Rigs on the edge and outside of the weedlines. We fished pretty quickly and covered water catching both Large-mouth and Small-mouth Bass. Rocky points held more Small-mouth, and the Large-mouth tended to be up in the shallower vegetation. It’s key to focus on the green healthy weeds, as they produce more oxygen and, as a result, typically hold more fish.

Sharbot Lake is a beautiful spot with plenty of rocky islands and shoals. If you’re new to the area, be sure to keep an eye out for the shoals, which seemed to be marked with white buoys for the most part.

We explored the lake, fishing inside bays and around islands, landing and releasing a nice number of bass. I didn’t catch any monsters, but that’s just how fishing goes sometimes.

Knowing they’re out there just ensures another trip back to Sharbot Lake Provincial Park very soon!