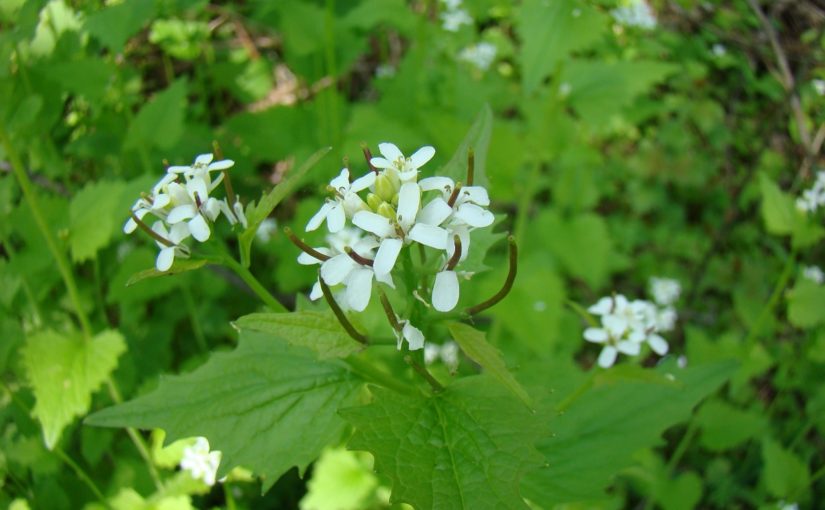 Garlic Mustard may sound like a gourmet condiment, but it’s actually an invasive species in North America, introduced from Europe over 100 years ago.

It is a major enemy in the ongoing battle to maintain biodiversity in Arrowhead Provincial Park and many other provincial parks. It’s considered one of Ontario’s greatest forest intruders.

The threat posed by Garlic Mustard

It displaces native wildflowers (such as White Trillium and Canada Mayflower),  as well as tree saplings. Without intervention, a healthy and diverse understory can see a rapid decline in biodiversity as Garlic Mustard outcompetes its native species neighbours.

Invasive species can dramatically alter the forest floor, by limiting the amount light and moisture in that habitat, as well as changing the type of plant debris that falls on it.

Salamanders, like this Blue-spotted Salamander (found in the park by our crew removing Garlic Mustard) live on the forest floor, often hiding under rocks and logs, feeding on invertebrates Natural habitat is much better for native wildlife than habitat dominated by invasive plants.

The battle rages on at Arrowhead

Garlic Mustard was first identified and removed by an Arrowhead park naturalist 13 years ago in 2005.

By 2009, the park began a more vigilant annual mapping, reporting and removal process, in order to prevent the further spread of the plant in the park.

Every year, park staff are trained in the identification and removal of the plant. Anywhere the plant is identified, it is removed and its location is mapped so we can see any changes/trends in growth (e.g., where the plant is being controlled, if and where any new plants are sprouting).

Why does it keep coming back?

Like other invasives, Garlic Mustard is incredibly successful at spreading and multiplying.

Here are some of the characteristics that allow this species to be so successful:

This means that there is no short-term fix, and it’s important that the removal program happens annually to keep the plant under control in the park.

This past spring, Arrowhead invited the public to assist in some removal sessions. We pulled over 40 kg (heavier than a large adult Algonquin Wolf!) of Garlic Mustard from over 30 campsites, adjacent wooded areas, and nearly 1 km of roadside! In the fall, we followed up on those sites with chemical spraying. Spraying the re-grown or thinned-out Garlic Mustard can further kill it off and help to keep the population under control.

Next spring, our staff will return to the treated sites to see what plants have returned, and will plan another removal blitz to keep this invasive species under control in the park.

What to do if you spot Garlic Mustard in one of our parks?

Find a staff member at the front gate or Visitor Centre, and let them know what you saw, including the location. Staff can then confirm the identification, map the location for park records, and dispose of the plant properly.

Please don’t try to remove it yourself.

It is very easy to spread the seeds so proper disposal is critical. Garlic Mustard can also resemble several native plants, so please allow our staff to confirm it’s Garlic Mustard before removing any plants.

If you’re a private landowner and think you could have Garlic Mustard on your property (or you’re just curious to learn more), check out the Best Management Practices in Ontario for Garlic Mustard.