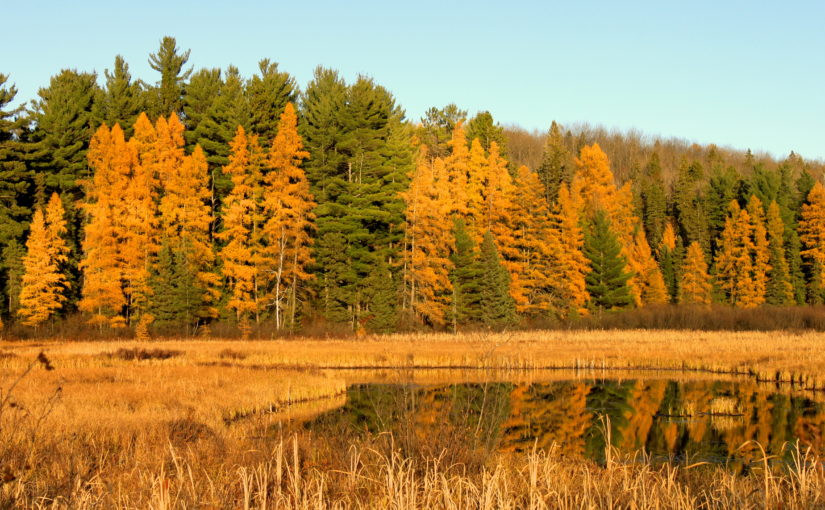 “Algonquin’s blazing landscape” is a term used to describe the park during the peak of fall colours, when the mid-slope of most Algonquin hillsides along the Highway 60 corridor truly seem ablaze with the bright oranges and reds of Sugar and Red Maples.

This peak — September 27 on average based on observations since 1973 — is universally seen as the most visually spectacular time to visit the park.

To help visitors in planning their fall colours visit, fall colours progress reports are given on the Ontario Parks Fall Colour Report. In most years, the status reads “past peak” by the second week of October and while this designation applies to the most impressive peak — that of the maples — it doesn’t acknowledge a second peak of colours that takes hold once most of the maple leaves have fallen.

In entertainment circles, an encore is a performance that follows the main act.  Few will doubt that the blazing maple peak is the main act when it comes to fall colours in Algonquin, but the golden encore is a thoroughly impressive following act that deserves plenty of mention.

Though each year is different, the golden encore usually takes hold about a week after the maple peak and can last through much of October and sometimes even into early November.

Which tree species are involved?

The change to “past peak” on our website indicates that the crowns of most of the park’s maples have lost their leaves.  While this makes the hillsides of maples less impressive, a walk through a maple forest still offers stunning views as the lower third or half of the maples still hold their colourful orange leaves.  At this time, American beeches- often growing alongside maples in mature forests- come into their peak by sporting golden-yellow to yellow-brown leaves.

Birches (yellow and white birch) and poplars (trembling aspen, largetooth aspen and balsam poplar) are “sun-loving” tree species that re-populate areas that have experienced a natural disturbance such as a forest fire.  Consequently, they often exist in large swaths.  When set against the dark greens of coniferous spruces and firs in wet, lowland areas, birches and poplars truly seem to glow.

The reds and oranges so enjoyed during the maple peak have also not entirely gone away: leaves of largetooth aspen- as well as some crown leaves of trembling aspen- typically turn an impressive orange-yellow; many bright red leaves of male red maples persist; and in dry areas at the tops of slopes, red oak leaves turn anywhere from brownish-red to deep scarlet with the odd purple-red burst thrown into the mix.

The curious case of the turning tamarack

Coniferous (cone-bearing) trees such as spruces, pines, firs, cedars and hemlocks are often described as “evergreen”—that is, their needle or scale-like leaves do not change colour and drop as do the leaves of deciduous trees like maples, beeches, oaks, poplars and birches.

One exception to this rule is the Tamarack: a tall, triangular coniferous tree covered in dense clusters of short green needles through the summer.  A species commonly seen in wet, boggy areas, Tamaracks usually grow amidst evergreen black and white spruce. The dark backdrop created by the spruces sets off the deep golden-yellow that tamarack needles take on during the golden encore.

At peak, the drooping branches of tamaracks seem to drip with hot golden-yellow wax. Tamaracks’ unique colour has been described by many as the most beautiful natural hue seen at any time of year in Algonquin.

Where to see the second peak along the Highway 60 corridor

Golden-yellows can be found all along the Highway 60 corridor, especially at these hotspots:

For stands of birches and poplars:

The Tamarack can be found all across Ontario, but is most common in the north.  Watch for its striking golden colour during your travels this fall.

This fall, 100% of daily vehicle permits will be available in advance. This means we will know in advance if we have reached capacity for the upcoming weekend, and we will provide these updates on Twitter.