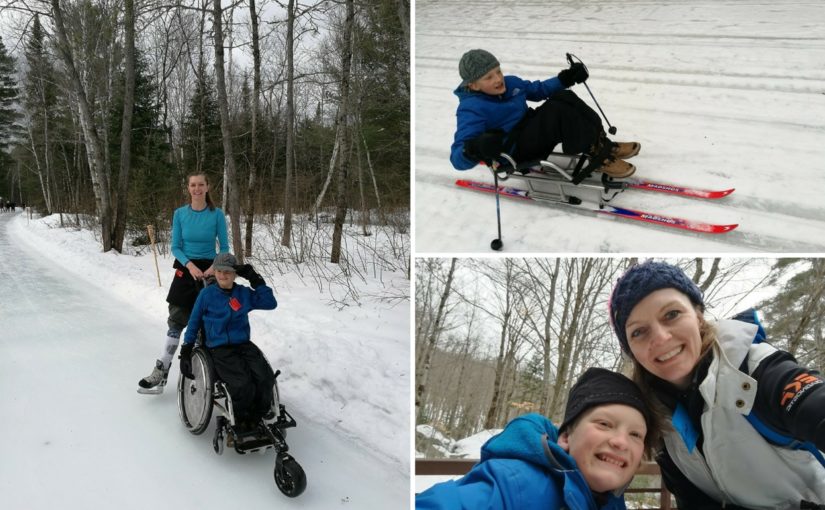 When you love the outdoors and have a child in a wheelchair, things tend to get a bit more complicated.

So complicated that for the first seven years of my son’s life, we never went on hikes. Winter outings were completely off my radar – try to get big and small thin wheels through snow!

At some point, I had had enough. I decided I did want to take my son out into nature. I wanted him to experience places he had never been to before, and share with him what I loved so much: quiet nature, deep forests, mountaintops, rough terrain trails, and changing weather conditions. I solved the impossibility by sheer effort. Meaning: lots of research, planning ahead, and by really knowing in advance what to expect, including where to go, what to do, and what to avoid.

Germany was really good for that. There was lots of accessible public transportation to get you to almost any trailhead, and good infrastructure because people tend to get out a lot. I was able to prepare by searching hiking trails to find out whether it could work for us. Sheer effort also meant building the strength for all kinds of circumstances.

Canada turned all that around. It was quite the opposite. Yes, there were lots of beautiful places to go to – but almost no way to get there! This was until we found Parkbus, which became our go-to means to get to the many beautiful provincial parks. Now here was the new challenge: in these new circumstances, we did not get to pick our destinations. We had to go with the flow, which was wherever Parkbus went. There was no point in doing extensive advance research. We either went or we didn’t.

I adopted a new attitude: The goal of getting outside was not about finishing a certain route or doing a certain activity any more – it was just about getting there, and then finding out what was possible. Simply being outside and out of the city became enough.

But there was another, bigger lesson in that. We had to accept the spontaneous, unplanned help from others. When you have a special needs kid, you tend to anticipate, plan ahead, figure it all out, and account for any kind of eventuality. But making trips into the unknown meant that I couldn’t figure it all out anymore. When things would get challenging, I needed to trust that others would be there to give me a hand, or come up with different ideas. This is where Ontario Parks staff came in. Far beyond just covering their duties, they helped us accomplish things we had never expected to be able to do.

There were so many beautiful experiences of staff helping us. They let us use their office space when we got rained out, and even offered Timbits! They transported the wheelchair from a tubing entrance to the exit point, and connected us to other campers that could help us get firewood to our campsite. They were always thinking outside the box, going out of their way to help us. Winter took this to another extreme. Parkbus took us to Arrowhead Provincial Park three times.

I had anticipated this trip as just a way to build lots of snowmen, and get outside for a whole day.  But this trip became a major milestone for my son’s physical abilities!

When we first arrived at the park, we started experimenting with what we could do. My son tried normal cross-country skis first, leaning on the ski poles for balance. It worked, kind of, but took an almost inhuman effort on his side. I took him on the ice trail in the wheelchair, and we had an amazing time flying around.

Then, someone suggested asking park staff for a sit ski. That’s where Collin came in. He made sure the sit ski was dug out of some far-away storage, and brought to the rental hut. He made sure a missing part was found, and available the next time we got there.

And on the third time, he set us up with a skating sledge for the ice trail!

All of the park staff were supportive and went the extra mile. But Collin had that extra smile and joy in his eyes whenever he saw my son using their equipment. I mentioned it to him and expressed my gratitude. Collin said he truly enjoys seeing my son try new things, and the enthusiasm he showed for it.

For Collin, it was clearly about more than just doing his job. That is what made our Arrowhead trip so memorable, and helped us conquer winter, despite the wheelchair and changing weather conditions!

I know that every disability is different, and that my son’s ability to get up from his wheelchair gives us options that others might not have.

But in the end, it is maybe not so much about the specifics. It’s about the fact that you simply cannot plan for human kindness, generosity, and enthusiasm – instead, you have to leave room for it. Set the bar low for what you might be able to do at unknown destinations, but set it high for what might just be possible. Even if it is just one more step into the unknown, it’s far more than staying home. Many thanks to Parkbus for getting us everywhere and accommodating for my son’s special needs – and to Ontario Parks staff for unforgettable experiences! “It was good for me to go outdoors because I could be outdoors, and I was really enjoying the snow. The best thing was that I was able to sit ski.

“The park staff were really nice especially Collin, because when we came he always was super nice, and I was always allowed to sit ski and that was a little bit hard but it was pretty cool to try out to sit ski.

“And the Arrowhead trips were really amazing fun because I got to try how to sit ski which I had never done before.”