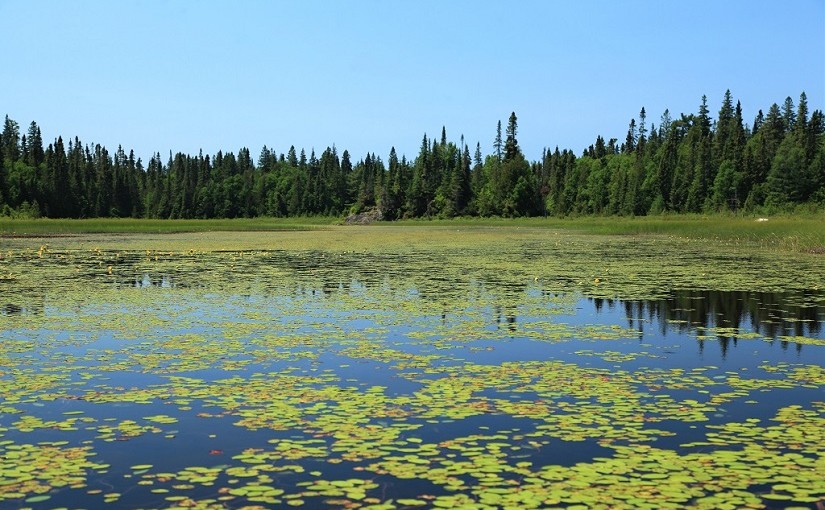 A few staff from Lake Superior Provincial Park went for a paddle across Mijinemungshing Lake (Mijin for short) and through the Mirimoki Wetlands to Mirimoki Lake.

Mijin is the biggest inland lake in the park, a popular destination for paddlers and anglers and home to a variety of birds and animals, including the common loon. We were fortunate to spot a nesting loon on a small island, but kept our distance to avoid disturbing the loon. Part way across the lake, we ran into Michipicoten High School’s Outdoor Class of 2016. Students from the class had camped on the lake the previous night, an introduction to canoeing and backcountry camping. (Canoeing and camping in high school? Nice!)

On Victoria Day Weekend, there was a fire on one of the islands on Mijin Lake. We stopped on the island to see if any new growth had started to appear. Thirty-three days after the fire, charred and blackened trees still dominate the island, and the smell of smoke hung heavy in the air. It was a dirty walk on the island; every branch brushed against left a black mark on skin or clothes. A number of bracken ferns had begun to grow, their bright green fronds in stark contrast to the blackened forest. After a stop for lunch, we arrived at the Mirimoki Wetlands, one of the largest wetlands in the park. Wetlands are considered the most biologically diverse of all ecosystems, home to a wide range of plant and animal life. Water lilies are abundant in the wetland, their yellow and white flowers doting the water surface. Pitcher plants, a carnivorous plant, are also very common, their bright red flowers standing out along the shore. A number of leopard frogs were seen, bullfrogs were croaking away, and one garter snake was spotted.

If you have a chance, jump in your canoe and go for a paddle. There is so much to explore in Ontario’s provincial parks!

Highlights: A day trip on Mijinemungshing makes for a nice introduction to the interior, or backcountry. A number of campsites allow for overnight trips. There are portages into several other lakes, including Almonte and Maquon. Due to the size of Mijinemungshing Lake, wind and waves can pose problems, so exercise caution.