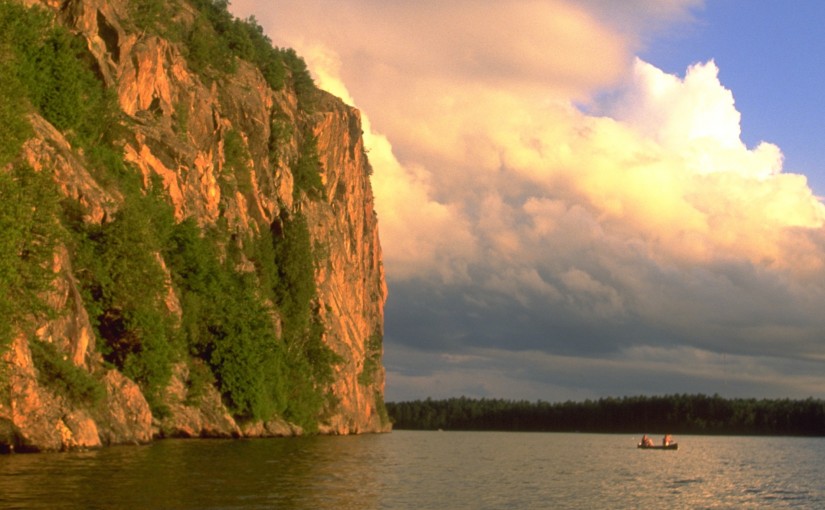 Jesse Parent has been going to Bon Echo Provincial Park every year for close to a decade. In fact, the well-known Kitchener musician is so taken by the beauty of Bon Echo, he’s written a song – a “love letter,” he calls it – which he performed at the park’s 50th anniversary celebration on July 21, 2015.


Jesse is just one of more than 180,000 people who come to Bon Echo yearly. They’re drawn by its awe-inspiring vistas. The rugged landscape of the Canadian Shield. The still, clear waters of Lake Mazinaw. The natural sand beaches.

They come to hike and canoe, swim and camp. They come to see Canada’s only lizard — the Five-lined Skink — and rare birds like the threatened Peregrine falcons that nest on Mazinaw Rock.

And they come to see the Rock itself. The massive cliff rises 100 metres above the lake and spans 1.5 kilometres. On it are drawn more than 260 ancient Aboriginal pictographs, one of the largest visible collections in Canada.

And to think that Bon Echo might never have become a provincial park had it not been for the foresight and generosity of one remarkable family!

The birth of Bon Echo

Flora MacDonald Denison, a dressmaker, author, feminist and social reformer, first came to the Bon Echo area as child with her family. Even as a youngster, she was captivated. So when the Bon Echo Inn came up for sale in 1910, Flora bought it and all the land around it. For years, she ran the inn during the summers, bringing her son Merrill along with her. He, too, developed a passion for Bon Echo.

“Bon Echo,” Merrill once remarked, “is one of the most spectacular natural beauty spots in Ontario – a place to which people are drawn from near & far to feast their eyes in wonderment on its majestic mass & find spiritual refreshment in communion with nature.”

In 1921, Merrill became the Art Director for Hart House at the University of Toronto. There he met a number of printmakers, talented men who would go on to become members of the Group of Seven. Merrill struck a deal with them. If the artists would do promotional posters for Hart House plays, he would give them free room and board at the Bon Echo Inn, which is how Arthur Lismer, A.Y. Jackson, A.J. Casson and others of the group came to know and love the area. And make the landscape famous around the world.

By the early 1960s, Merrill, who was childless, was thinking about what would happen to the Bon Echo property once he was gone. Though he could easily have sold it in parcels and made a good profit, he was determined to preserve it for future generations. Eventually, he and the provincial government came to an agreement: the property – more than 8,000 hectares – would become a provincial park for the public to enjoy, as the Denison family had done for nearly 60 years.

If you’ve never been to Bon Echo Provincial Park, come and see for yourself why this magical spot has been attracting so many people for so many years.