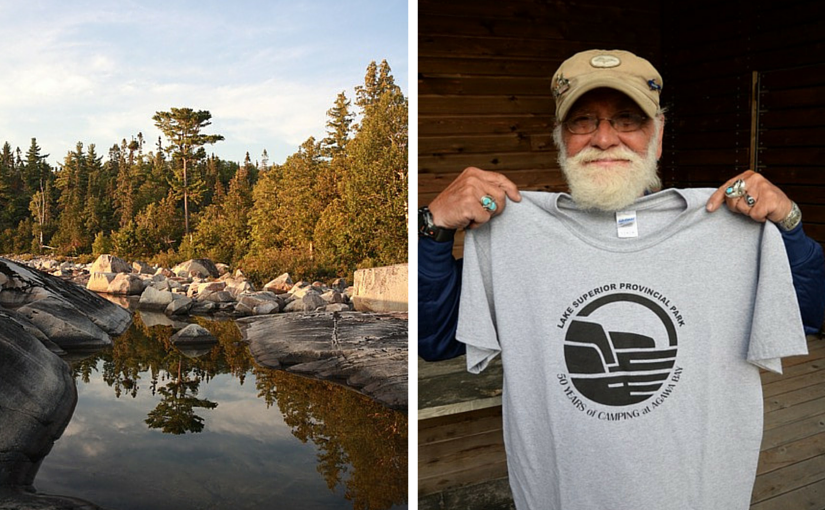 Gene was born and still resides in Kalamazoo, MI. In the early 1960s, Gene and his wife Ellie went on a road trip, hoping to be one of the first people to complete the circle tour around Lake Superior after the completion of the Trans-Canada Highway.

After making it as far as White River before being turned back due to a highway washout, they decided to stop and check out Agawa Bay campground in Lake Superior Provincial Park. Gene and Ellie ended up camping for a couple of weeks, and from that single camping experience, a lifelong friendship was born.

Gene and Ellie’s first “official” camping trip to Agawa Bay was in 1965. Agawa Bay was very different in 1965. No comfort station, electrical sites or Visitor Centre, and everyone camped in a tent.

Gene has camped at Agawa Bay every year since 1965, making 2015 Gene’s 50th consecutive year of camping at Agawa Bay.

Gene has three children, daughter Becky and sons Greg and Matt, as well as five grandkids: Joey, Ryan, Jamie, Evan and Kara. All of Gene’s children and grandchildren have camped at Agawa Bay over the years. Becky’s first trip to Agawa Bay was in 1971, when she was only 6 weeks old.

Campsite 239 is Gene’s favourite site, and Gene normally camps for at least three weeks every year. Gene and his purebred border collie Dakota can always find something to do at Agawa, from relaxing on their campsite to hiking and exploring the park.

A couple of Gene’s favourite places in the park are Gargantua Harbour and the Orphan Lake hiking trail. When the grandkids come camping, they always make a trip to Katherine Cove, to spend a day on the beach and go for a swim. The grandkids refer to Katherine Cove as “the warm water place.” A lot of park staff know Gene, and Gene goes out of his way to introduce himself to new staff every year.

Gene has many fond memories of the park over the last 50 years, but a couple stand out. In 2012, there was a nuisance bear in the campground. A very big nuisance bear…

Gene is a very conscientious camper and always keeps a clean site. For some reason, this nuisance bear was very interested in Gene’s site, at one point climbing onto the tonneau cover of his truck and biting into the tailgate. To commemorate the experience, Gene had now has a tattoo of a black bear on his forearm.

A few years before the bear incident, a canoe tipped in Lake Superior off-shore from Agawa Bay campground. Emergency personnel were notified, and, by luck, a search and rescue Hercules aircraft was in the area on a training mission.

The Hercules circled around Agawa Bay many times, dropping an inflatable life-raft for the canoeists. The canoeists safely made it back to shore and the campers at Agawa had a front-row seat.

Gene, now 71, has travelled a lot in both Canada and the US, and he has yet to find a place as relaxing and peaceful as Agawa Bay campground and Lake Superior Provincial Park.

From the cool, clear waters of Lake Superior to the parks’ hiking trails and beaches to the endless starry nights and occasional display of northern lights, Lake Superior Provincial Park has become a second home to Gene.