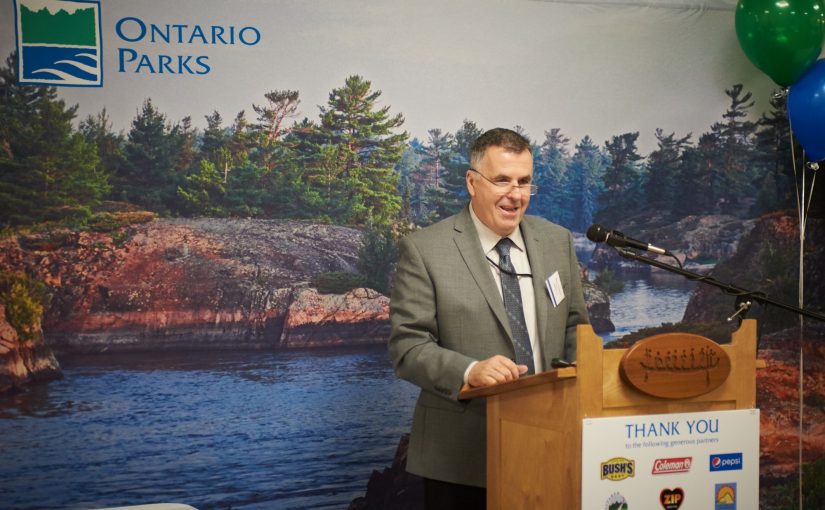 Welcome to our “5 Questions” series! We chat with park staff around the province to give you an inside look at what it’s like to work at Ontario Parks.

Acting Assistant Deputy Minister Bruce Bateman began his career at Bon Echo in the summer of 1978. He’s worked his way up from the gatehouse to the ADM’s office, with stops as park superintendent, zone manager and director along the way.

What did you do as director of Ontario Parks?

I worked with my management team to set the strategic direction for the organization. Where are we going in the next five years? What do we want to work on? I also represented Ontario Parks at the national and international level. For example, I sit on a committee called the Canadian Parks Council with directors across the country as well as Parks Canada. We work together on matters of common interest.

What’s your favourite part of the job?

Visiting parks. Our strength is the folks who work for us. I get to meet them, and see what they’re doing on a day-to-day basis. To hear their concerns and find out what they need from me. That’s the fun part of the job.

You must have visited a lot of Ontario Parks over the years. Have you been to all of them?

Not by a long shot. We have 340 parks in the province.

I’ve been to some really unique parks, though. Voyageur Provincial Park in the far southeastern part of the province. Kakabeka Falls and Sleeping Giant in the Thunder Bay area.

I even had an opportunity to visit Polar Bear Provincial Park up on the James Bay–Hudson Bay coast. We went up on a tour of the Mid-Canada Radar Site before it was remediated.

It was a huge clean-up project. They removed old buildings and vehicles, asbestos. Tonnes of contaminated soil. Thousands of barrels of PCBs, oil and toxins. That’s why the team received the Environmental Commissioner’s Merit Award. I want to get up and see it again, to see the difference.

Do you have any personal favourites?

Grundy Lake, I spent some time there. Killbear is a unique park. But Bon Echo: it has a place in my heart.

It’s known for the Bon Echo Rock, this large granite rock that juts out of Mazinaw Lake. And along the base of the rock is the largest collection of Indigenous pictographs in Canada. A large inn was built at Bon Echo, right on the water’s edge, around the turn of the 20th century. It was built before there were any roads. People came by stagecoach or wagon.

The Group of Seven went up there to paint. The inn burnt down in 1936, but some of the outbuildings are still there.

So Bon Echo has this unique history from before contact with Indigenous people right through to European settlement. It’s a cool place to be.

If I gave you an all-expenses-paid week of vacation—any season, any Ontario Park—where would you go and what would you do?

Where would I go? You know, I never saw a polar bear when I was up at Polar Bear Provincial Park. I’d love to go back up, see a polar bear, see caribou. It’s a place I can’t get to on my own. So if it was all expenses paid, I’d probably go there.

Check out our other “5 questions” posts for more insider info about Ontario Parks!