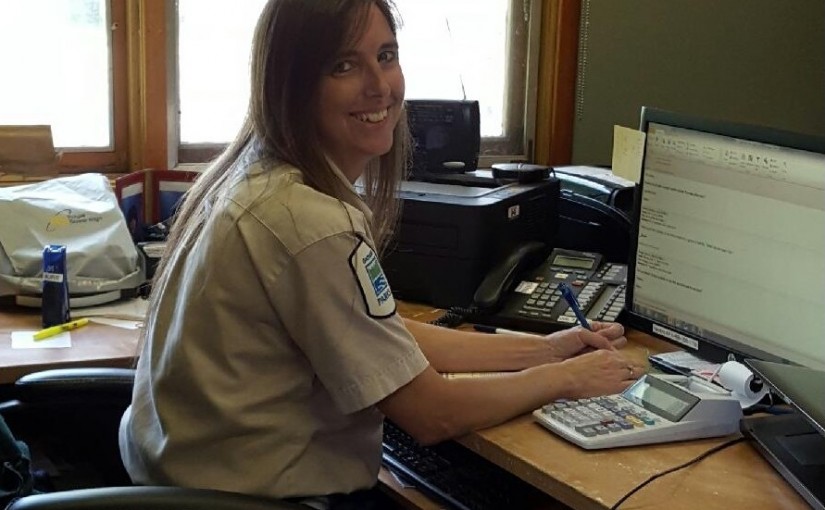 Welcome to our “5 Questions” series! We chat with park staff around the province to give you an inside look at what it’s like to work at Ontario Parks.

Laurie Dulmage is now in her 16th season as the Park Clerk at Rideau River Provincial Park. She answered five questions from Marketing and Communications summer student Mitch Jackson about her career with Ontario Parks.

What’s your favourite part of your job?

I enjoy the finance and accounting part of it (things like expenses, revenue and payroll). The financial side is my favourite as I have an accounting degree. Other components of my job include completing contracts and all hiring documents for all staff. I also supervise, hire and train the Gate Attendants. Where’s your favourite paddling spot in the park?

Out on the Rideau River, along the shores of the park. There is the main channel for boaters, but along the shores of the park it’s shallower. Campers can rent canoes and kayaks here at the park. The Rideau River itself is actually a UNESCO World Heritage Site, and the park is located on the longest stretch between the Rideau Canal lock systems. We always recommend visitors head upstream first, so that if they aren’t strong paddlers, the current can assist them on the way back. What’s your favourite time of year in the park?

September! The colours of the leaves are beautiful, and it’s quiet. Things are winding down for the season at this time.

What was one of the most exciting days in your job?

The Rideau River’s 50th Anniversary Day! The park opened in 1963. It was reforested farmland, initially planted with mostly white pine trees. The day of the anniversary, we had MNRF Conservation Officers, the OPP Marine Unit, Parks Canada staff with their beaver mascot, children’s games, fishing for kids, and musical entertainment in the evening (not to mention Smokey Bear!). Hamburgers and corn on the cob over the fire.  I like to cook the burgers right on a grill over the fire and boil the corn in a pot over the stove.