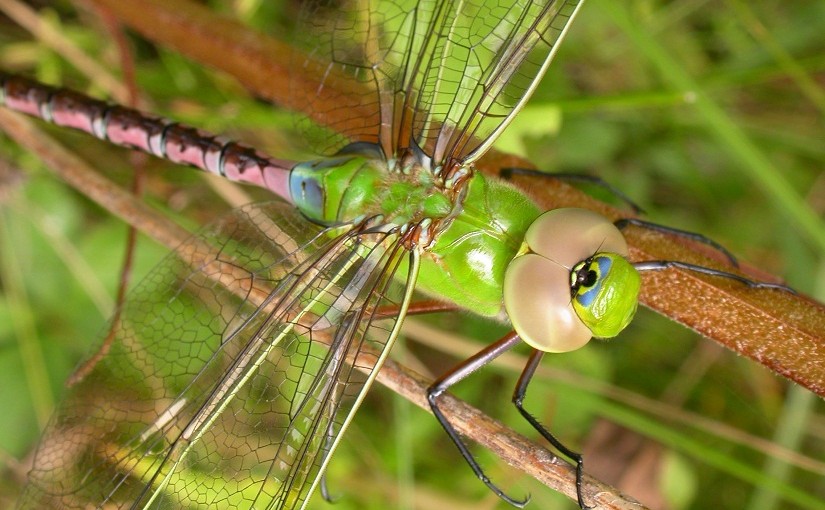 If you’ve ever watched a dragonfly speed over the water, you know how captivating they are!

But while they’re among the oldest flying insects – they’ve been around for 250-300 million years — scientists are still just learning about them.

Here are 10 things we do know:

1. There are more than 5,000 species of dragonflies in the world. About 130 species have been spotted in Ontario.

2. One of the most popular species here is the Green Darner. It’s one of the easiest dragonflies to recognize because it has a bright green thorax (the middle section of the body).

3. Green Darners are found around ponds, lakes and wetlands in Ontario.

4. Some Green Darners migrate south in the fall. You can see “flocks” of them rising up from the grasses along the shores of the Great Lakes in late August at parks like Presqu’ile Provincial Park, Darlington Provincial Park, and Sandbanks Provincial Park. From here, they move down the east coast of the U.S. Their destination? Probably the southern U.S., but no one knows for sure.

5. Dragonflies are hard to catch, which makes it difficult to conduct tagging or transmitter programs, though there are some underway.

6. Many species of dragonflies, the Green Darner included, gather in swarms to feed or migrate, a phenomenon you can see in Ontario in the spring and fall. Why? Possibly to defend themselves against predators, but scientists don’t know that for certain.

8. They’re amazing fliers. They have two sets of wings so they can fly straight up or down, go backwards, fly upside down and hover.

9. Dragonflies are great hunters. In their larval stage – which can last up to five years – they live in the water and eat anything that comes near them, including aquatic insects, tadpoles and small fish. As adults, they eat flies, mosquitoes, grasshoppers, butterflies, flying ants and even other dragonflies, which they catch while they’re in flight. Want to learn more about the dragonflies you can see in Ontario? Next, head to your nearest pond, wetland or beach with a pair of binoculars and start watching these fascinating insects. Fall is a great time for dragonfly sightings!

If you can’t identify a dragonfly, snap a photo and tweet it to us tagged #AskanOPNaturalist. One of our naturalists will happily tell you what you saw.

Today’s facts came courtesy of our own Presqu’ile Provincial Park naturalist David Bree, who has been intrigued by dragonflies for years. Want to contribute to the science of dragonflies? Share your sightings on iNaturalist.

Reporting what kinds of dragonflies you see, where you see them and in what numbers helps scientists gather important information.